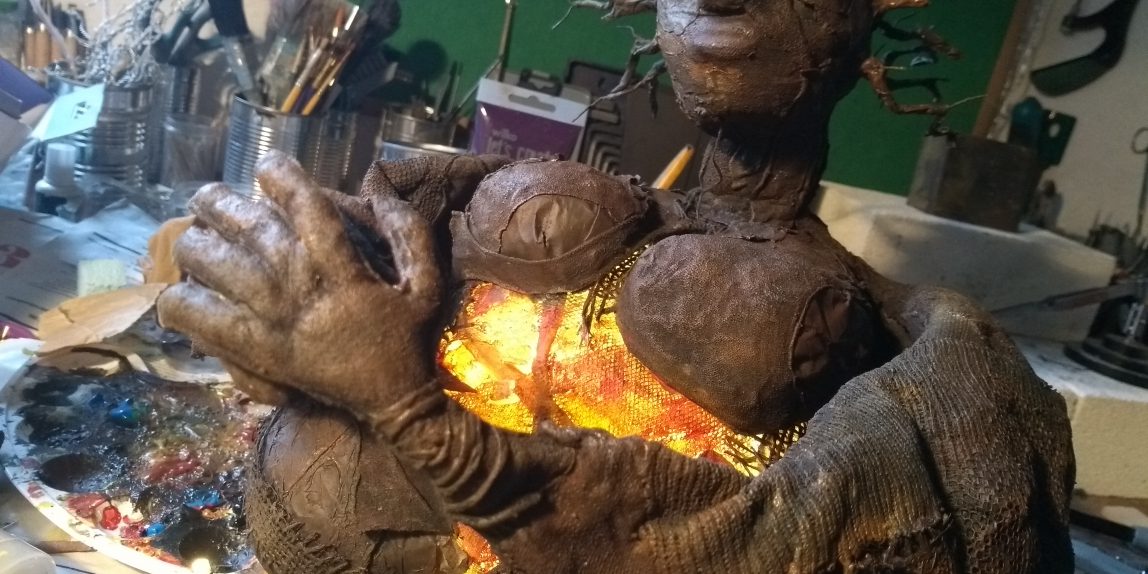 Earth Moma or Mother Earth is the other main character in the music video ‘Welder’ I made for the experimental rock band ‘My Octopus Mind’. Earth Moma is a puppet as well as the main set in the video. 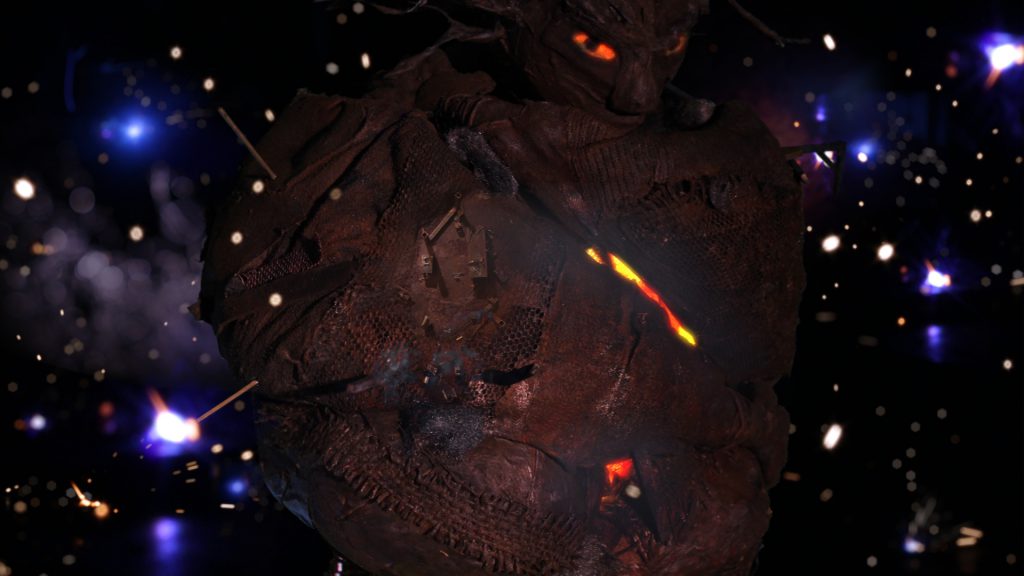 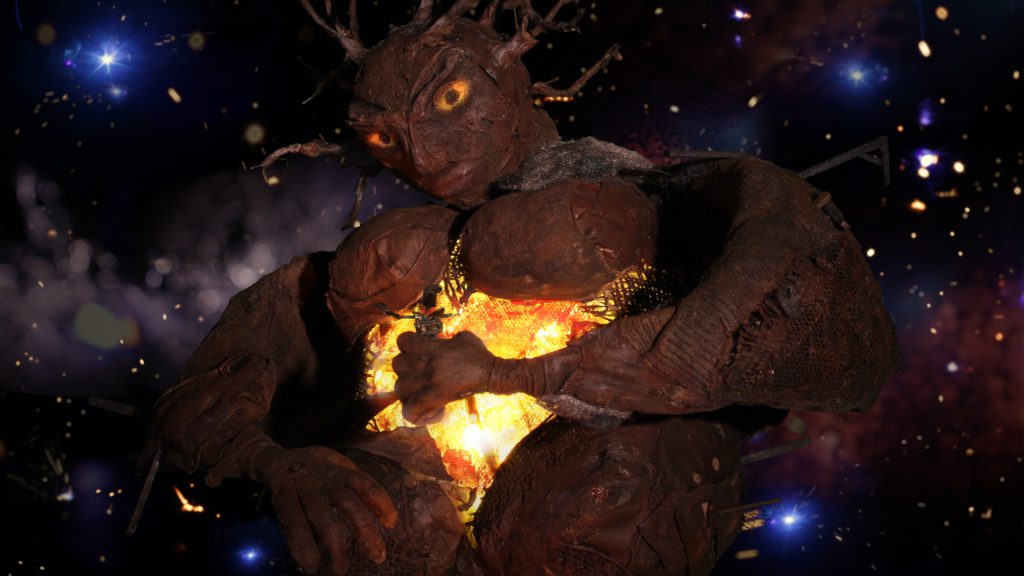 ‘Mother Earth’ is the planet on which the Welder lives, in this video she is a small and desolate planet, with little life left on its surface. In the first half of the video she doesn’t move and is curled up into a rounded planet shape. Later on in the story when she wakes up her eyes open and her long wide rounded arms fold open as she reveals the burning fire that glows inside her belly. There were many challenges in designing and building this puppet.

I didn’t have much time to test and only a small budget, so some compromises had to be made. For the welder character I had been able to re-use old ball and socket armature parts but for this puppet I had to rely on a wire armature skeleton. The character only has a short sequence of animation, and only her arms, hands, neck and face move. However, the aluminium wire wasn’t ideal for the kind of subtle movements and for the closed positions because of the spring-back and bouncy nature of the material. I was able to make it work with additional pins, a rig and some extra support and creative solutions throughout the shoot. If I would build a similar puppet again I would probably approach it differently, but in the end I was able to get the performance I needed from her.

Below are some quick concept design drawings I made before starting the building process. I took inspiration from a variety of places, from sculptures, drawings and paintings that were interpretations of some sort of mother earth goddess to the textures and colours of African fetish ritual dolls. 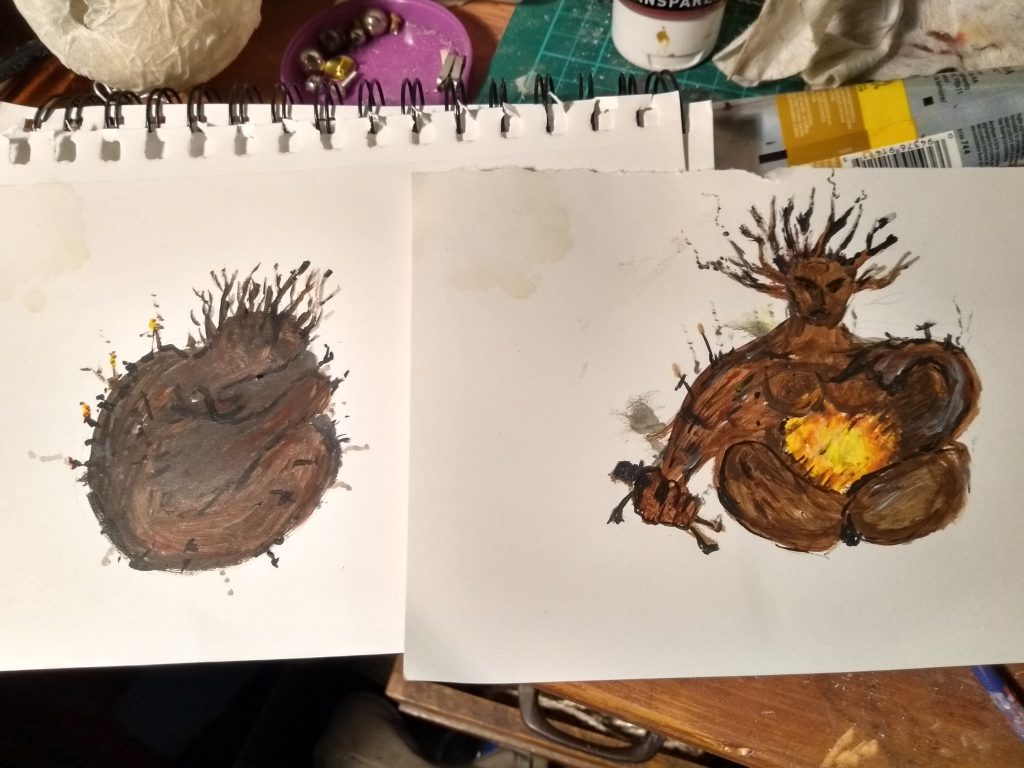 These are some pictures of the fabrication process of the puppet. The starting point was quite unusual for a puppet build. I started out making the hollow belly. I wanted the belly to be hollow so that I could put lights inside to create part of the glowing fire effect practically. I used textiles, paper, PVA and textile hardener, with more transparent fabrics for the front side of the belly where the light had to shine through. The rest of the armature and rigging point attachment was built around this hollow round centre.

Watch this little making of clip for an impression of the building process:

"…it has to be said here: the master of the show is Mother Earth. She is grand, godlike and curiously attractive in appearance. She can give the kind of hug naughty children wouldn't want to have but respect nevertheless." – @zippy.frames Thank you so much to Zippy Frames for the article and review of my latest music video 'Welder' for @myoctopusmind Link in bio. 🙂 Here is a little making of making the Mother Earth puppet… #musicvideo #motherearth #earth #planet #welder #myoctopusmind #puppet #stopmotionpuppet #stopmotion #animation #modelmaker #puppetmaking #fabricator #textures #wire #painting #artiststudio #workshop #studio #fairylights #fire #hangarpuppetanimationstudio